We’ve heard throughout the years that salmon populations all over the world are declining. In BC, this statement is particularly concerning. This year, the Fraser River saw its lowest numbers of sockeye salmon returns ever recorded. In November 2020, the Committee on the Status of Endangered Wildlife in Canada listed more than half of the 12 chinook salmon populations in southern BC as endangered, threatened, or of special concern – only one population is not at risk and three populations could not be assessed because of insufficient data. According to a new study from Simon Fraser University, salmon are 70% less diverse than they were in 1913. This is alarming because diversity is an indicator of a species’ resilience and adaptive capacity to survive in a variable environment. 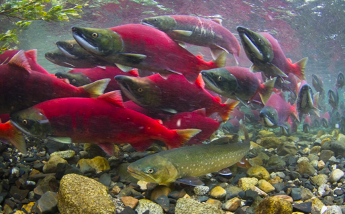 BC salmon face many threats, including overharvesting, habitat destruction from human-caused development and mining activities, dams and river blockages, and warming waters due to climate change.

Why are salmon at risk? Salmon populations face many threats, including resource development that causes habitat fragmentation, degradation, overconsumption, and warming waters due to climate change. Salmon farms are also breeding grounds for sea lice which cause thousands of salmon deaths every year. To put things into perspective, BC’s commercial fisheries usually catch over 1 million salmon per year. In 2019, only 629,000 salmon were caught.

To many communities around the globe, salmon are an important dietary staple. However, for Indigenous communities, salmon are lifelines for Indigenous culture, tradition, rituals, spirituality, and food and trade. It shouldn’t come as a shock that the most significant changes and impacts to fishing stocks took place after colonization. Pre-colonization, in-river fisheries were the dominant fishing method, not large-scale, mixed-stock ocean fisheries. They were more sustainable in terms of targeting specific populations without intercepting many populations at exploitive and industrial scales.

What can be done? Urgently, we need to realign the scales of fisheries with biologically relevant scales. This means we need to harvest sustainably based on salmon populations’ availability, health, and regenerative capacity. We need to bring back Indigenous fishing systems, including in-river fisheries, dip nets, fish traps and weirds, sustainable harvesting, and reciprocal relationships with the environment. 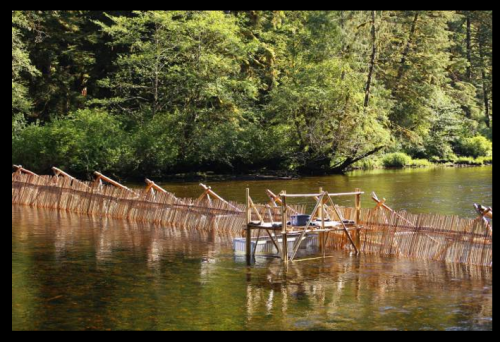 A weir on the Koeye River on BC’s central coast that is built with locally sourced materials and weighed down with rocks and sandbags. It’s a simple technology that allows for more monitoring than commercial fisheries because they catch salmon in rivers at the end of their journeys, known as the “terminal fishery,” and provide harvesters with information about the populations they’re catching in real-time.

To support the implementation of Indigenous fishing systems and selective fishing technologies, we need both provincial and federal policy reform to make harvesters responsible for monitoring and managing fishery impacts, while sharing the catch within their communities. Individuals can contact the Department of Fisheries and Oceans Canada (DFO) to discuss why better fisheries management, with an emphasis on incorporating Indigenous fishing systems, are critical for sustainable salmon populations now and in the future. If you would like to participate in open consultations to influence the DFO’s policies and programs, you can start by looking here. The key issue to bring up to the DFO is the importance of incorporating Indigenous fishing methods with commercial fishery practices. It’s not realistic to do away with one type of industry completely, but mixed fishing methods can relieve pressures on salmon populations as localized fishing methods help sustain a stronger human-ecosystem relationship, with a greater knowledge of local biodiversity and environmental limitations.

If we can support the restoration of Indigenous governance at the community and local level, we help decentralize salmon management decisions away from large institutions and shift profit to the pockets of Indigenous fishermen and their communities. Restoring Indigenous co-governance to salmon management is a critical component of reconciliation. More research is needed to expand on why and how Indigenous fishing systems can be incorporated into mainstream fishing methods.

Read this article by The Narwhal to learn more about revitalized BC First Nations traditional technologies.

As Robin Wall Kimmerer, the author of Braiding Sweetgrass explained, humans don’t automatically have a negative relationship with nature, it is possible for humans to impact the planet positively. Humans can give back to the earth through reciprocity and gratitude. In the case of salmon, this looks like not preserving and protecting their populations rather than overharvesting.